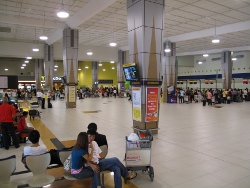 Interior of the soon-to-be-closed Budget Terminal at Changi

Changi Airport has announced that the Budget Terminal will close on 25 September 2012. All airlines currently using the terminal will be moved to Terminal 2. The closure is to make way for a new Terminal 4, which will offer a slightly more upscale experience for budget airlines.

The new terminal is expected to be completed in 2017. Airlines affected by the move are Berjaya Air, Cebu Pacific, Firefly, South East Asian Airlines and Tiger Airways.