Posted on Monday 16 September 2013 by Michael

A couple of significant items of note in this week’s news:

Also, if you have booked a hotel anywhere in the vicinity of Nusa Dua, you may want to check with the hotel about whether or not you still have a room.

Asia’a ‘Boutique Airline’, as it likes to call itself, has announced that beginning on September 30 they will begin flights to the new Burmese capital at Naypyidaw. The airline already flies to Yangon and Mandalay. Flights will use the smaller ATR72 plans and there’s no indication of frequency on the airline’s web site as yet.

Back to Don Muang, Again

Posted on Wednesday 7 November 2012 by Michael

I’ve just had my first chance to experience the revived Don Muang International Airport, which now serves as Bangkok’s primary airport for low cost airlines. In October, the airport reopened the old international Terminal One to host all the airlines, which includes the country’s largest low-cost carrier, Air Asia, as well as Nok Air, Orient Thai and Solar Air. 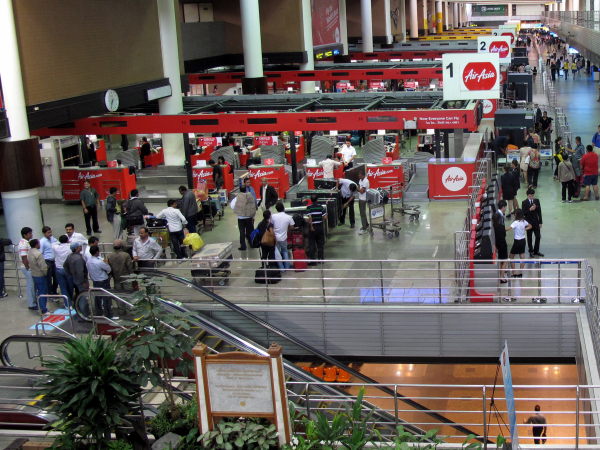 As you can see in the photo above, the old departure hall looks more or less the same. Aside from a few new walls here and there to divide domestic and international passengers and shut off the still-unused Terminal 2, there hasn’t been many changes to the old structure.

Things are a bit different once you get through security into the departure area. On the whole, I’d have to rate the departure area as much better than the old domestic terminal at Don Muang, and even in many ways an improvement on the current domestic wings of Suvarnabhumi. There’s quite a few food options, from Burger King and Subway to Starbucks and Krispy Kreme (which still seems to be popular with Thais). There are a few cheap options as well as some no-name local places. You’ll also find convenience stores, boutiques, kid’s play areas and lots of room to just sit and wait. The one thing really missing is any kind of public wi-fi.

This is a quick trip, and I’ll be back on Friday to see how arrivals looks. The one key question is taxi availability, since it was a problem before. We’ll see how I fare then.

Update: On returning, there really wasn’t a problem at all with taxis, except that the queue to get one was rather long. It moves along rather quickly, so don’t get discouraged. The main holdup is usually tourists who don’t know where they’re going, or don’t know what to do once they get the queue slip. Also, don’t try to negotiate the fare with the person at the desk; you pay what’s on the meter, period, and they can’t help you.

Posted on Wednesday 10 October 2012 by Michael

Just finding out about this, but it seems that as of 4 October 2012, flag carrier Garuda Indonesia has been including the airport tax (Passenger Service Charge, or PSC) in the price of all domestic flights. That means that it’s no longer necessary to pay the departure tax at the airport, if you’re flying Garuda. Note that this only applies to domestic flights. According to an article in today’s Jakarta Post, implementation of the new scheme seems to be going well.

The article goes on to say that the scheme may be extended to other carriers and international flights in the future. Indonesia is almost the last country in Southeast Asia to still collect the PSC at the airport rather than letting the airlines collect it through ticket prices. Cambodia dropped it for international travelers last year.